I dropped by Newspace the other night to check on the display and read some of the comment cards people have posted on the wall. And when I say posted, I mead POSTED. Hand written on a card with a felt tipped pen and thumb tacked to the wall. Now that’s what I call leaving a note. 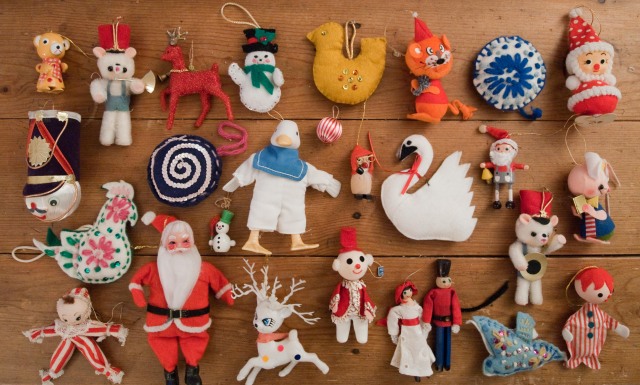 In addition to my Empire Plastics Christmas blowmolds obsession, I am also fold of old Christmas ornaments. I’m always digging at estate sales for ornaments I can rescue and put up for “adoption” (give as conceptual, creative, and cheap gifts for family and friends). I like to think I’m providing a service, not only for the adopter that finds themselves with a unique addition to their tree, but also for the adoptee ornament that I’ve saved from certain tragic end in a landfill somewhere.

Stuart Mullenberg shot some great portraits at Newspace during the opening night festivities. Fun was had by all…

The Santa Clones are back…

THE SANTA CLONES INVADE THE PEARL. 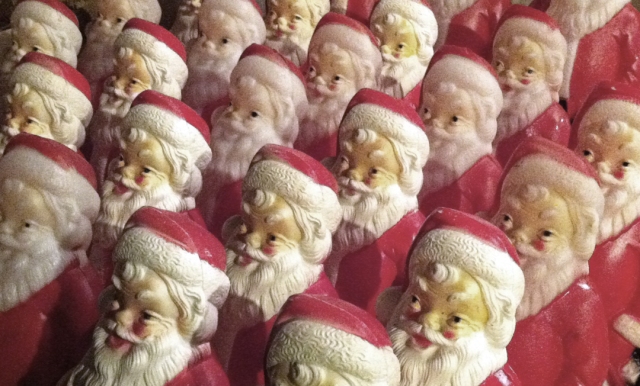 The collection has a few new members this year and has found a perfect location in
The Pearl. Just a block south of Jamison Square, they will be casting their eerie glow the whole month of December through the New Year. Cool Moon Ice Cream is nearby, serving up coffee drinks and hot chocolate (not to mention delicious ice cream) until at least 10:00 pm on most nights. I will be at the display for an informal reception Saturday night, December 10th, from 6:00 to 8:00. Come by 718 NW 11th Avenue and get your Clone on. And for St. Nick’s sake, dress warm.

Before installing this year’s display, I had to go out to the garage and process some of the new members of the group, some of which were still in their shipping boxes.

STEP ONE: OPEN AND REMOVE FROM PACKAGE. Unwrap and give a quick once over.

STEP TWO: INSPECT. Check paint quality, look for cracks, and inspect cord (if included) for frayed wires. Had to painstakingly remove several rocks from inside this one through the tiny hole in its back. I’m assuming it was to weigh the figure and keep it from toppling over when displayed. There was a lot of shaking and rattling, even a bit of swearing.  Thanks Verdigre, Nebraska. 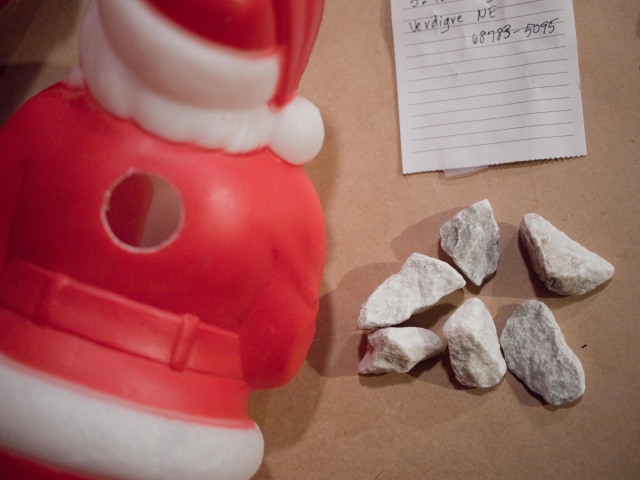 STEP THREE: RECORD CITY AND STATE OF PURCHASE. Not sure exactly what I’ll do with this info, but at some point, the recorded city and state of each Santa will be part of the display.

STEP FOUR: JOIN THE RANKS. Add it to the rest of the group. 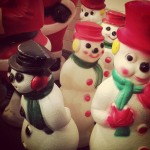 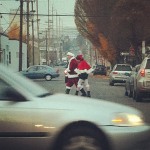 The installation went pretty smooth. It took me two evenings after work, but got it done. First night was setting up the figures, second was lining the hallway with the comment cards from previous years.
There was a great turn out. I didn’t take many photos, as I was busy chatting with folks. Thanks to all of you that came on Friday night. And for those of you that didn’t make it, the display is up all month during Newspace regular gallery hours.

There are some new faces to the group this year. I thought I’d introduce a few of them with their eBay photos and share where they are from. I’m a little concerned about the foursome from Herkimer, New York. They look like troublemakers.

This December, Newspace Center for Photography will host a public display of my personal collection of vintage holiday characters. My fascination with them started many years ago with a large plastic Santa I used to covet from my Grandma’s house. Now decades later…thrift stores, garage sales, antique shops, and eBay auctions have allowed me to indulge my obsession and continue to grow the collection. All the figures were manufactured in the late 60s and 70s by Empire Plastics Corp., a now defunct Tarboro, NC based company. I’m drawn to the consistency in style the Empire characters had back then, an innocence and comfort in their expressions that current lawn and porch decorations just don’t possess. On display will be an assortment of Santas, snowmen, reindeer, and elves, all ranging in size from 13 to 46 inches tall. They’ll be dusted off and plugged in all month, delighting Portland gallery goers with their warm, nostalgic glow.

Chris Willis is a local creative from Portland, Oregon. His Empire Plastics collection was previously displayed in an empty retail space in West Moreland in 2009, and in 2010 his army of Santa clones were installed at bside6 in the lower Burnside neighborhood. The art community first learned of his obsession of all things old and unique when his photographic installment, “Estate Sale” was showcased at Newspace in 2007. He continues to rummage in his free time.

The photography of Jessie Rieser will be in the main gallery at Newspace, showcasing his survey of uniquely American Christmas traditions.

Beyond the glowing green and red lights, past the shimmering silvery tinsel, around the fragrant pine boughs, another Christmas lingers, a Christmas of contradictions.

This Christmas is complex and at times, uncomfortable. It’s awkward and sometimes bleak. But it is also sincere and celebratory, colorful and creative.

This is the Christmas I capture in this first chapter of a photographic exploration of the biggest event on the American calendar. I grew up in a secular home and at times felt like a Christmas outsider, never connected to the holiday’s religious importance, or its more extreme cultural trappings. But in these photos, I become a Christmas insider, working to discover and reveal what holiday magic, or mania, compels so many to devote thousands of hours to hanging lights, to carving and painting figurines, to building miniature villages, to converting their homes, yards, garages and cars into monuments to merriness.

Initially inspired by the absurdity of a five story inflatable Santa who appeared to be guarding a tree lot, I have launched this survey of uniquely American Christmas traditions. “Christmas in America” is an unvarnished examination of the ways people mark the holiday’s meaning.

Jesse received his BFA in Photography from Arizona State University and art history from the Herberger Institute of Art and Design. His work has been honored by the Art Director’s Club of New York, The PDN Photo Annual, The American Photography Annual, Critical Mass Top 50, Art of Photography Juried Exhibition, CCNY Annual Juried Exhibition and Center’s Review Santa Fe 100.

All the Santas have been thoroughly sacked until next year. They will go up into the rafters in the garage until such time as they are beckoned to a new empty space.